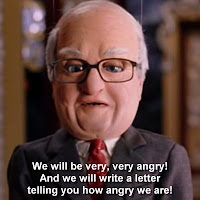 The argument I develop formally below is relatively straightforward, though I think the details are easier to see once you work through the math. (At least, they were for me. YMMV.) Angry letters don't themselves deter anyone. But they can serve as alarm bells. That is, international institutions do not need enforcement capability so long as they affect the likelihood of individual states taking punitive actions. Below, I analyze a model where they do so by providing new information. But another channel through which institutions like the UN can increase the likelihood of individual states like the US engaging in punitive action is through shoring up public support for such efforts.

How much does this matter? Clearly, some states are still willing to misbehave. North Korea and Iran have active nuclear programs, many states sponsor terrorist organizations, etc. What we don't know is how many states would do those things in the absence of the UN. In the model I analyze below, some subset of states would pursue objectionable policies in a world without institutions like the UN but would not do so in a world with them. Sure, some states would never misbehave, and some will misbehave no matter what, but institutions in this model do more than simply allow states with good intentions to move closer to the Pareto frontier. They cause some states who would not otherwise do so to behave like model citizens of the international community.

Details of the Argument

Suppose we've got two states, cleverly named 1 and 2. While 1 is an upstanding member of the international community, the world has its doubts about 2.

At the start of the game, 2 decides whether or not to pursue policy \(p\) at cost \(\kappa>0\), where \(p\) is a policy that threatens the interests of the international community, or at least those of state 1. The obvious example here is developing nuclear weapons, but \(p\) could also refer to sponsoring terror, violating human rights, engaging in currency manipulation, providing subsidies to exporters, or whatever.

Note that 2's choice is not observed by 1. However, it may be detected by some international institution, denoted I. Specifically, assume that if 2 pursues policy \(p\), I catches them in the act with probability \(r\). And when I does so, I subsequently writes an angry letter that the entire world will see. Otherwise, I gives 2 a pass.

For the sake of simplicity, I assume away bias by I, false positives, and other potentially interesting frictions. The goal here is simply to show that angry letters might matter, not to understand when, where, and why they would be written or withheld. In other words, I isn't a strategic actor here. I is, as I suggested above, an alarm bell. And one that doesn't even always ring when it should.

After 1 observes I's choice of whether to write an angry letter or give 2 a pass, 1 decides whether to pursue some punitive action. At the extreme, this might take the form of a ground war culminating in regime change. But it can also be thought of as limited strikes or non-military responses such as sanctions, diplomatic isolation, etc. Otherwise, 1 engages 2. That might not involve much more than keeping the channels of communication open, but it could involve substantial levels of trade and security cooperation. Let's keep things general.

If 1 chooses to punish and 2 was pursuing \(p\), 1 again receives \(-c_1\) while 2 receives \(-c_2 - \kappa\).  Note that 1 does not receive any direct, consumption benefit from punishing 2 when doing so is appropriate. The payoff is the same whether 2 was pursuing policy \(p\) or not. Realistically, 1 might suffer some domestic cost once it becomes clear that 2 wasn't pursuing policy \(p\), but for our current purposes, such details are unimportant. This simple setup still ensures that 1 wants to punish if and only if 2 is pursuing policy \(p\) since \(-1 < -c_1 < \beta\). Of course, what makes this interesting is that 1 doesn't know whether is doing so or not.

That's not surprising, of course. That 1 will always punish 2 after I catches 2 red-handed is important to the story, but where things get interesting, and where the value of formalizing the argument becomes clear, is when we consider whether 2 would pursue \(p\) in the first place.

If 2 is blue, 2 never pursues the policy. Doesn't even want to. The behavior of 1 and I are irrelevant. Fine. Dandy. Let's move on.

If 2 is red (i.e., has a relatively high temptation to pursue \(p\)) and 2 knows that 1 will punish it even if I does not write an angry letter, then 2 will not pursue the policy because 2 won't reap the benefits thereof and will incur cost \(\kappa\) for nothing. Again, not particularly interesting.

Ah, but what about when 2 is red and 2 knows that 1 will engage if I gives it a pass? Here, 2 might be willing to pursue the policy. But the operative phrase here is "might be", for reasons that will become clearer in the next paragraph. More formally, 2 pursues the policy iff \(\color{red}{\overline{\tau}} > \displaystyle \frac{\beta + r(c_2+\kappa)}{1-r}\). In words, 2 pursues the policy if and only 2 is not just bad, but really bad. How bad, you ask? Well, that depends on a lot of things. Specifically, the size of that ugly fraction you just glossed right over, which itself is a function of how beneficial cooperation is, how likely 2 is to get caught if 2 pursues the policy, how costly it is to be punished by 1, and how costly it is to pursue the policy. But whatever. We don't need to get into all the different comparative statics, interesting though some of them are.

Here's the real important point. Suppose there was no institution. That would mean that \(r=0\). In that case, 2 would pursue the policy so long as \(\color{red}{\overline{\tau}}>\beta\), which I already stipulated. In other words, the red type is by definition interested in misbehaving. In a world without institutions, every red type would pursue policies contrary to the interests of the international community if they thought they could get away with it. But in a world with institutions that write angry letters, some of them won't. Perhaps a large number of them. How many well-behaved states in the world today would be pursuing nuclear weapons or otherwise working against the interests of the international community if not for the UN and other institutions of global governance? I don't know. I won't even venture a guess. But I feel pretty confident in saying that we're not talking about an empty set.